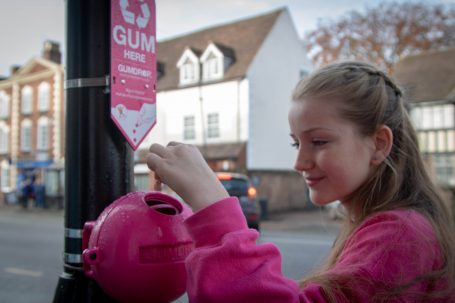 Gumdrop was founded by Anna Bullus in 2009 to tackle the global problem of chewing gum litter. Gumdrop is the first company in the world to recycle and process chewing gum into a range of new compounds that can be used in the rubber and plastics industry.

Gumdrop collaborates with schools with the aim of bringing together the next generation to help inspire and create change towards some of the most pressing waste issues, starting with chewing gum, which comes just after the number one cigarettes.

At the launch in Bewdley, students from The Bewdley School started by drawing rings around all the chewing gum on the High Street and watched as people realised just how much chewing gum they were actually walking in.

Written by The Bewdley School | Published on 22nd January 2019