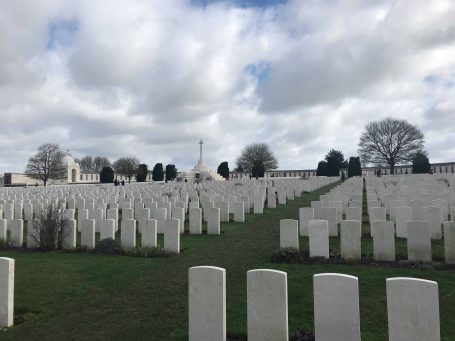 On the weekend of the 8 March, Mr Willets along with two Year 9 students represented The Bewdley School at Legacy 110. Legacy 110 is a government funded project to engage students in the history of the Great war, with the aim to tell others about their experience so that the memory of the ultimate sacrifice by many young men and women is never forgotten. The Bewdley School was selected as one of fifteen schools from across the country, where 30 students all came together to remember the Great War.

Ellie M and Eddie M were selected to represent the school after all students interested in going wrote a letter saying why they think they should go. Ellie and Eddie were selected and have been true ambassadors for the school and have come away with stories and memories to tell all their peers.

On the Friday students travelled from school and arrived at Kingswood Grosvenor Hotel, where students met with students from around the country. Once all together they got to see original World War 1 equipment and got to hold a Lee Enfield riffle. The next morning students travelled to Lijssenthoek Memorial, which was an evacuation hospital during the war. From here they then visited Passchendale Museum, which was followed by a moving Last Post ceremony at Menin Gate.

On Sunday students went to Sunken Lane which was the destination of the Hawthorn Ridge mine explosion, which marked the first day of the Battle of the Somme where 20,000 British soldiers died on the first day of the offensive alone. While there students visited the Caterpillar Valley Cemetery, where it shows the German retreat between July and November 1916 during the Battle of the Somme. Finally students visited the Thiepval Memorial which is dedicated to the missing 72,000 British and commonwealth soldiers lost during the battle.

Today students visited the German Memorial of Langemark and the British Memorial of St George’s Church in Ypres. They then visited the Tyne Cot Cemetery which is the worlds largest Commonwealth War cemetery, while there students paid tribute to local soldier Private W Shenton who lived in Bewdley and died during the First World War.

To see some of the pictures from the students trip, visit our Facebook page

Written by The Bewdley School | Published on 11th March 2019