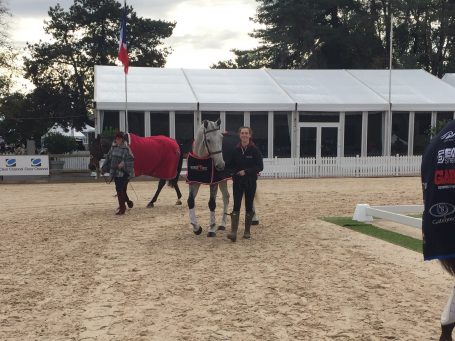 Amber S in Year 11 has been fortunate enough to be given the opportunity to groom at another 5* event, this time in France at Les 5 Etoiles de Pau.

Amber said: ‘I have been fortunate to be able to fulfil the role as groom and gain valuable experience that can help me to stand out as I start to think about relevant work experience to apply for university studying veterinary science.

We started the long journey to the south of France, at 5pm at a service station just off the motorway, where we met the other horse travelling with us (after a 2 and a half hour journey to the services)! We then headed down to Portsmouth for the 10:45 over night ferry to Caen. As we had horses on board we had to make frequent stops to offer them water and give them a chance to stretch their legs, which makes our journey considerably longer. After the 7 hour ferry we drove a further 3 hours to stabling to give the horses a few hours to themselves to chill out. We began the final leg of the journey to Pau at 11am (local time) and arrived at the stables just after 9pm. The long journey sounds like the perfect opportunity to sleep all day, but between the stops for the horses I completed the school work I would be missing for the week.

During the week I look after Balladeer Miller Man, mucking out, feeding and grazing him aswell as tacking him up ready to be ridden and keeping him clean! On Thursday morning I plaited and cleaned Miller for trot up, he passed and was then ridden twice later in the day, ready for his dressage test the next day. On Friday I re-plaited him in-between jumping and warming him up for his test and he did a calm and improving test. Saturday was the cross country day and we weren’t due to go until 4:30 so it was a long and nervous wait! Unfortunately Miller had an early and very uncharacteristic runout at a corner so he was retired as it was so unusual.

That evening Miller had a thorough check by the GB vets and physio, and we discovered that he has pulled muscles in his back so was unable to have enough power to jump which explained the unusual stop. Due to Miller being the primary concern he was treated twice that evening to make him more comfortable and once again in the morning. Blood tests were also carried out to see if there were any underlying viruses to help explain the disappointing cross country.

Although it was a disappointing end to the season it shows the highs and lows to horses and the work that goes in behind the scenes. Despite this, the week was worthwhile and valuable to my future aspirations.’

Well done to Amber for all her hard work, and for providing such an interesting write up!

Written by The Bewdley School | Published on 5th November 2019